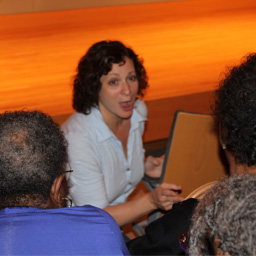 “We are all actors. Being a citizen is not living in society, it is changing it.” - Augusto Boal

Eve is a highly experienced facilitator and educator of the "Theatre of the Oppressed". This is a system of theatre practices developed by Augusto Boal that equip non-actors with the language of theatre.

Eve studied intensively with Augusto Boal. She has worked as a teaching artist, director, and curriculum developer delivering workshops to NYC public school students and teachers, mental health and housing clients, senior groups, organizers and activists. Her expertise lies in linking the perpetual human capacity to learn and create with the engaging and activating educational processes of The Theatre of the Oppressed. She received her M.A. in Applied Theatre from NYU and her B.S. in Performance Studies from Northwestern University.

A play written by ladies from the Morris Senior Center (Bronx, NY), presented at the NYC Public Library on 5th Avenue to the NYC DOT commisioner. Directed and faciliated by Eve Silber

A program by The United Way brought teaching artist Eve Silber to Flushing High School to meet with this class once a week for 12 weeks to write a ten-minute musical on the subject "Compassion Matters." It was performed at The Apollo Theatre on May 22, 2006.

Another play written by a group of students from Flushing High School, Queens NY — Eve met with this class once a week for 12 weeks to write a ten-minute musical on the subject "What Matters To Me." The play was performed at The Apollo Theatre on May 20, 2005.

"A visit to one of Eve Silber's workshops a few years ago was my first up-close exposure to educational theatre in action. Eve had been working with a class of 8th graders in Queens and she hired me to coach the students in the final stages of rehearsal for the performance of their original play. I found the experience extraordinary. Through improvisation and playwriting exercises the class had written a play. Each student had had a part in writing and was featured in one or more of the scenes. The atmosphere of the classroom was remarkably similar to some of the best professional theatre experiences I have had. Eve, as facilitator and director, had clearly unleashed a great deal of dramatic capacity in every one of these students, -- without exception. Eve explained to me that her goal was to create an experience for the students where they actively used theatre as a language with which to explore their world. These students were a focused ensemble with a common creative goal under Eve's expert guidance and direction. They were delighting in their task and pleased with their product. For me, it was a stunning display of what had drawn me to the theatre in the first place."

"This was great emotional, psychological and tactical training for activist work on the streets, be it participating in demonstrations or working with small groups. Shy people, like me, can get some help being more comfortable with the dynamics of empowerment."

"This workshop was not only fun but extremely edifying and useful. The exercises fostered community and creativity, challenging me to be aware of how I communicate and how I react to others, as well. Eve did a great job of facilitating, encouraging and challenging us to explore new ways of expressing ourselves creatively as we continue to build the movement. I left feeling nourished both mentally and physically and inspired to move forward and apply the things I'd learned."

"I was quite impressed by how well a group of people can gather to work for a common cause without boring meetings and endless discussions."

"I didn't know much at all about Theatre of the Oppressed walking in but left with not only an appreciation for such a holistic form of organizing but that much more respect for Eve Silber's rock star capacity for creative activism!"

"Eve's workshop is highly recommended: As a doctoral student of Applied Theatre at NYU and Licensed Drama Therapist, I can attest to Eve's ability to meet group needs with highly relevant activities facilitated with panache and aplomb. Part of the success I witnessed was based on Eve building upon what occurred previously. New members were easily brought up to speed, nevertheless, cultivating a community and culture of with a shared arts-based language will go very far to generate the personal and societal changes we each want to implement. Boal's powerful work is also notoriously misunderstood and misapplied. However, Eve's facilitation underscored her fluency and deep sensitivity for the nuances of TO work"

"Eve Silber delivers Boal's Theatre of the Oppressed group work with presence and clarity. Drawing on her own intense experiences, she seems able to relate to any one's situation, however big or small, and invite others to relate to their experiences in a way that brings the whole group into a deeper awareness of its self. By opening up and sharing our imagination and experiences. especially in relationship to power and interpersonal dynamics we find we can create our own power. As collective witness and through replaying the events in our lives, we prepare us for doing it better next time. Eve is flexible and responsible to the max, with that amazing fresh balance of play and precision."

"The canonical Theatre of the Oppressed is a living breathing awareness theatre! The workshop I attended at Judson, taught by master joker (facilitator) Eve Silber, shone light on an art form gifting tactics for continuous change. Everyone is encouraged to be the joker. Energy there was contagious, no moths circling around light bulbs, instead an intelligence that is urged to artfully operate open heart surgery in public. Lines in the sand, be the general surgeon."